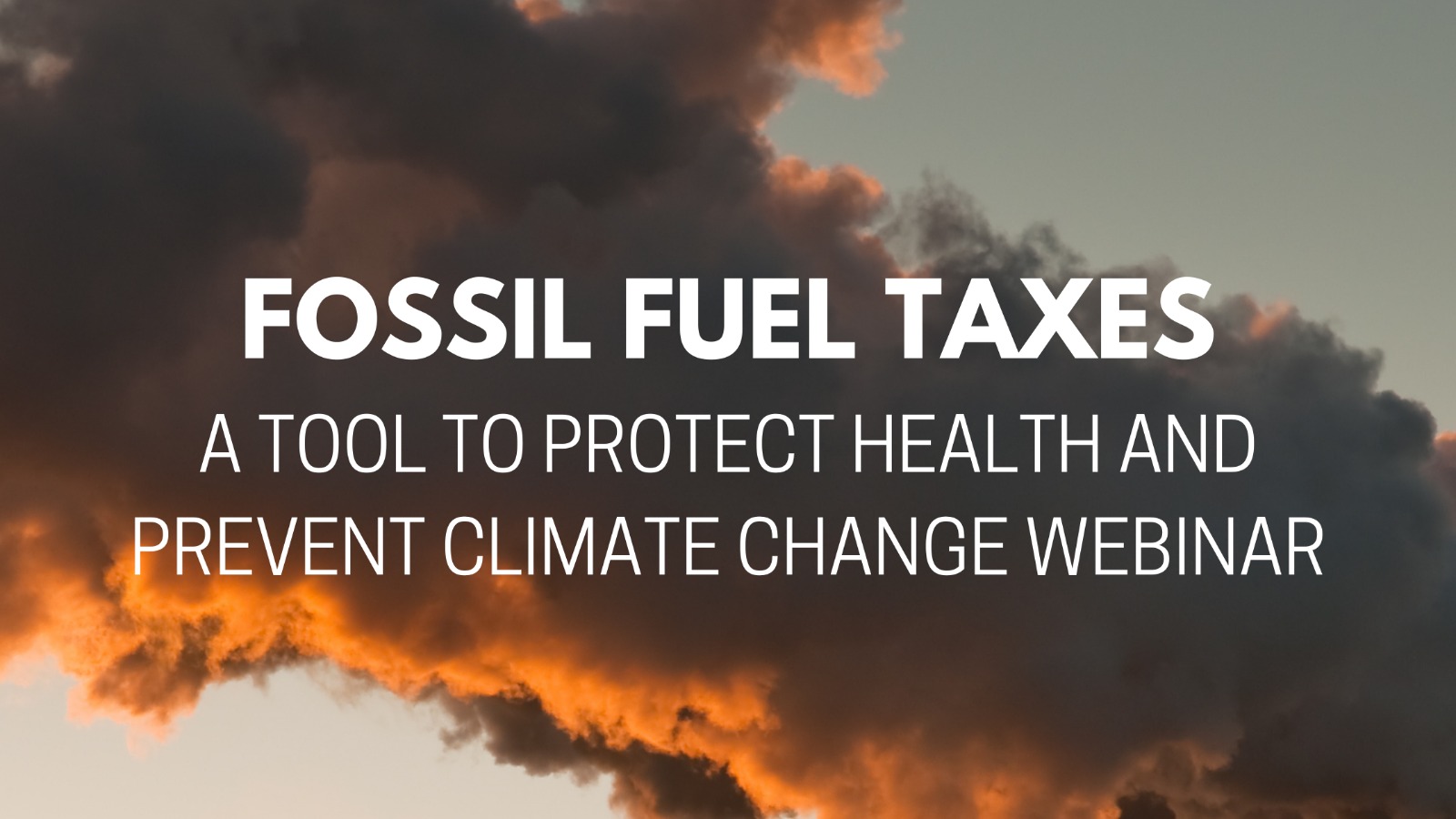 In the lead-up to COP26 in Glasgow, United Health Futures hosted a webinar with a panel of experts to discuss the health perspective of fiscal policies targeting fossil fuels. For years, the push for decarbonization and renewable energies was based on environmental arguments. While valid, this approach has largely failed to capture the attention of policymakers and the public. With the world’s attention now focused on health in the aftermath of the COVID-19 pandemic, there is an opportunity to reframe the advocacy for fossil fuel fiscal policies as a health policy.

To lay the foundation for this argument, Dr. Barrak Alahmad, a PhD candidate in Population Health Sciences at Harvard, outlined the manifold adverse health impacts of fossil fuels. The particulate matter released from fossil fuel combustion leads to a range of diseases such as cardiovascular and respiratory diseases, cancer, and even birth complications. Additionally, the heatwaves due to anthropogenic climate change is estimated to have caused 37% of heat-related deaths between 1991-2018. However, Dr. Alahmad also noted that “there are epidemiological gaps in areas where environmental exposures are already at extreme magnitudes”, indicating that the true extent of climate change-related health impacts may be underestimated by current evidence.

Despite the economic opposition to fiscal reform on fossil fuels, evidence presented by Ms. Lourdes Sanchez, a senior policy advisor at the International Institute for Sustainable Development, suggests that fiscal reform on fossil fuels may actually have exceptional economic benefits. Currently, fossil fuels are more subsidized than taxed, having costed 470 billion USD in global taxpayer money in 2019. In some countries, these subsidies are comparable to, or even exceed, the amount of public investments in education or health. Moreover, these numbers are in addition to the 6 trillion USD that was spent to cover the externality costs of fossil fuels—that is, the additional costs incurred by fossil fuels that must be paid for by the public.

Given the robust evidence for fossil fuel fiscal reforms, why has it been neglected on the political agenda? The answer lies in our absolute dependence on fossil fuels that evolved into a right to consume over the decades, and the subsequent power bestowed on the fossil fuel industry. “You are talking about creating a change in this relationship that people have with this product that they have developed over time… just think about how much more power the fossil fuel industry will have”, said Dr. Odd Hanssen, a health economist at the World Health Organization. However, the health perspective has largely been absent from this conversation; reframing fiscal policies on fossil fuels as a health reform, while simultaneously promoting the economic case for ending fossil fuel subsidies, may therefore be an effective approach to break through this resistance.

Mr. Neeshad Shafi, an environmental policy activist, demonstrated a practical example of this from the Middle East and the Gulf countries. In 2019, campaigns for health taxes on shisha and sugar-sweetened beverages created a momentum that allowed the opportunity to increase public awareness of the removal of fossil fuel subsidies as a fiscal policy for health. However, as Mr. Shafi noted, these efforts must “…come through health professional[s] who would stand that this is going to impact the citizens and communities living in these countries.”

As the webinar came to a close, the health and economic evidence for fiscal reforms on fossil fuels was apparent. As she considered the next steps, Dr. Geordan Shannon, a board member of UHF, highlighted the importance of a compelling policy story to mobilize and unleash the required finance: one that could begin with the removal of fossil fuel subsidies. The COVID-19 pandemic has created a unique policy window that we must seize to advocate for fiscal reforms on fossil fuels to create a healthier future for people and the planet.

← Key tools in health policy: health taxes Universal Health Coverage - where are we? →